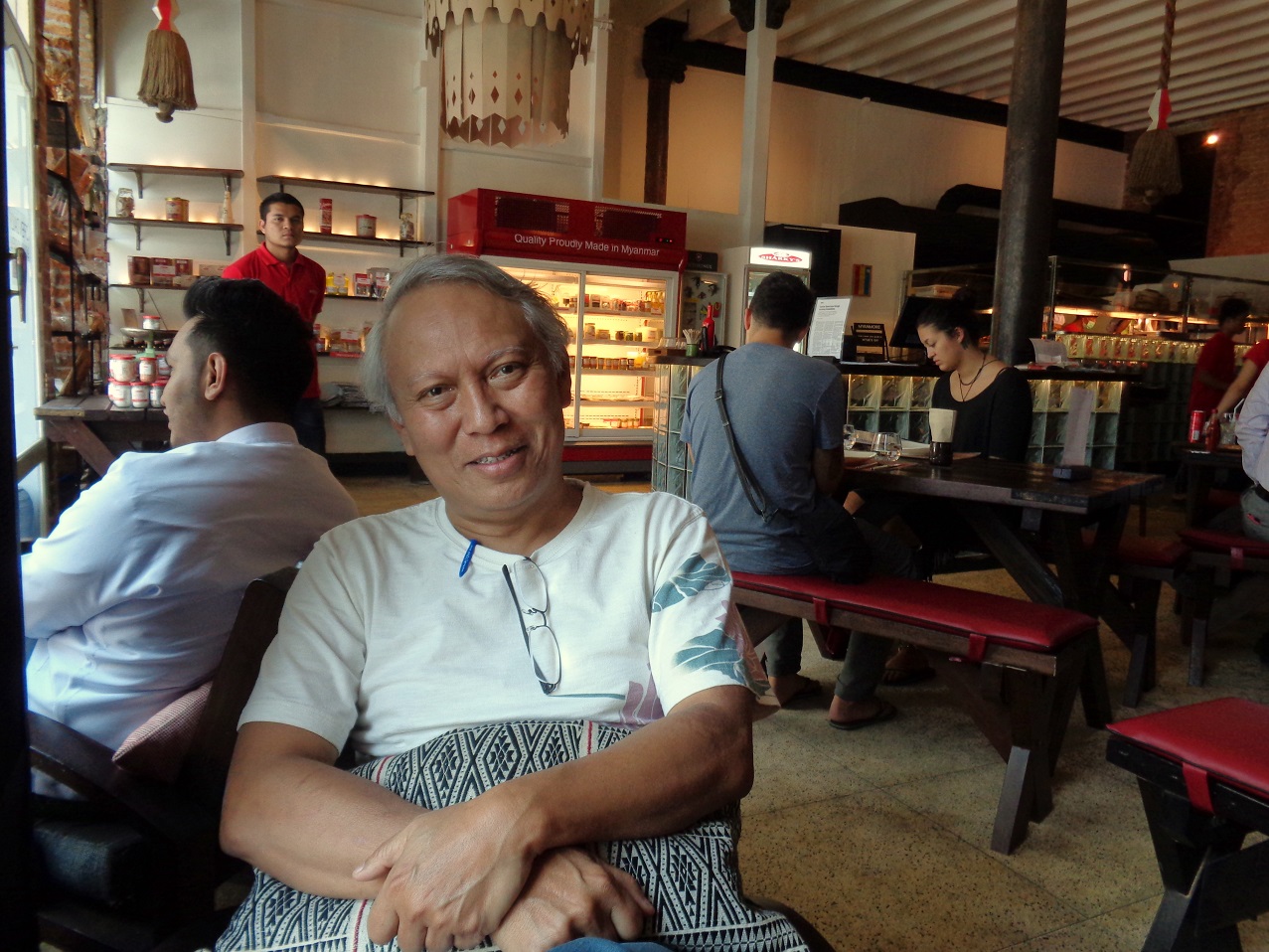 Published in Mizzima Weekly on 20 February 2016

For 16 years, Sharky’s has satisfied Yangonite’s cravings for delectable cheeses, breads, gelato and cured meats, to name but a few of its luxurious offerings. During the decades Myanmar spent as an isolated, pariah state under international sanctions, such items would have been virtually unobtainable. However few would have complained: Myanmar’s population happily consumes more rice than anywhere else in the world and expats and repats were thin on the ground until the country’s reform process began in 2011. Yet the namesake of this foodie institution wasn’t deterred by starting out with a small client base; if anything it was a plus, as mass production has never been part of his game plan.

U Ye Htut Win (aka Sharky) views the world in terms of an 80:20 split – the 80 percent being “the big boys playing the industrialised game and then there’s us, the artisans, who look beyond short-term profits.”

However Sharky’s is no social enterprise and Sharky makes no apologies for the fact that his wholly organic goods don’t come cheap.

“From the beginning Sharky’s has always been labelled as expensive. That’s how it is – and I take it. But what I say is that at least I know why it’s expensive. I take care of my staff, I treat my animals well – everyone wins. Our profit margins aren’t gigantic. They are healthy – and that’s how it should be because this is a business and we have to pay our bills. Producing food on my terms is costly, but there is a reason why we do things the way we do. ”

Sharky told Mizzima Weekly that when he returned to Myanmar in 1996 after a life lived in many different parts of the world as the son of a diplomat, he was driven by a desire to “prove what can be done in a third world country with a first world vision and concept.”

Eighty-five percent of Sharky’s products are locally sourced and the entire supply chain is controlled by Sharky’s to ensure the high quality standards it prides itself on.

“People tend to only talk about how a chicken is bred. The slaughter part is gruesome, but you have to think about it,” he said.

Sharky explained that his chickens stop being fed two days prior to being killed: they consume a liquid diet of probiotics to clean out the gut. Even if an intestine is ruptured by mistake, the risk of salmonella is slim. This practice is in stark contrast with mainstream poultry production in Myanmar.

“Because chickens are sold by weight, they are usually stuffed with feed and their stomachs are full of shit,” Sharky said.

That’s not be good for the consumer: nor are the incorrect bleeding techniques that often lead to contamination. Sharky’s drains the animal’s blood by slitting the throat as per halal and kosher methods. Most others don’t bother: a chicken may be struck from behind, causing its lungs to explode. Others die prematurely due to cramped conditions or illness, after which they are sold to market buyers. Sharky explained that any of these factors can result in chicken – a white meat – taking on a pinkish appearance even after it’s been cooked.

“It’s a warning sign that consumers should be aware of,” he said.

Sharky’s takes the extra precaution of dry plucking, as the more common method of a ‘hot water bath’ can lead to skin contamination via dirty water.

“Our methods are time and labour intensive, but in return the risk factors are eliminated,” he said.

Why staff and suppliers matter

The other component in Sharky’s quality control is heavily investing in its 230-strong team of staff, whether it be a pig farmer or a cashier. The average retention rate is 10 years, which is rather extraordinary in the hospitality industry – and in Yangon to boot.

“The reason why [my staff] stay is because I look after them as family members. We provide maternity leave, support for their children’s education and a catering food service from breakfast to dinner. We spend years investing in artisan training. The problems begin with constant turnover: your skill force gets diluted, which means that standard operating procedures aren’t followed. And if you comprise on that, your days are numbered,” he said.

Unsurprisingly, Sharky’s labour costs are double the norm of anyone in the business, he added.

Sharky’s also spends a great deal on top-notch cooking equipment: the most expensive of which is a rotisserie that cost 25,000 Euros and was imported from France. Sharky’s European hand-slicing cutters cost 15,000 Euros apiece.

Sharky’s latest investment is a downtown outlet that has delighted many fans – though perhaps no one more than Sharky himself. He discovered the space after being invited by his good friend, the owner of Rangoon Tea House, to provide comments on his newly opened restaurant’s cuisine, which is adjacent to Sharky’s Pansodan Street premises.

The 120-year-old building was originally a high-end department store and boasts high ceilings supported by Scottish beams and Lancashire steel. However during the aggressive nationalisation that occurred during the 1960s, the venue became a Chinese restaurant. Sharky first saw it as dirty and dark, with the Manchester bricks plastered over and a mezzanine design. Yet he immediately realised its potential.

“It was love at first sight,” he said.

He signed a long-term lease two weeks later to prevent the building’s impending demolition. However it took over a year to restore the premises to its former glory and save it from demolition from money-hungry construction companies.

“There was a sign out the front saying it was designated for destruction – the owners wanted to get rid of it and build something new.”

He pointed to a brash bank building opposite the street that was once a beautiful building as an example of the consequences of a collective failure to recognize Yangon’s ‘X-factor’.

Sharky enlisted support from Thant Myint-U of Yangon Heritage Trust and YCDC’s elected township official, who collectively convinced the owners that the building should be preserved.

“We proved that the building was sound and shouldn’t be demolished – and not only that, it should be value-added,” he told Mizzima Weekly.

He expressed solidarity with Gekko, Union Bar and River Gallery, who “are showing how private enterprises are entering the market with a vision.”

“I believe that for Yangon to compete with other regional cities as a tourist destination, it has to preserve the value it already has.”

His vision is a downtown Yangon that tourists happily linger in – as opposed to what he sees as the current pattern of spending a day in the commercial capital to visit Shwedagon Pagoda before heading off to the more popular destinations of Mandalay, Bagan and Inle Lake.

When asked whether the year-long renovation process spilled into millions of dollars, Sharky declined to comment, saying only that “we spent a lot and it will take years to see the returns.”

Sharky’s is also in the process of setting up a two-acre artisan factory in the outskirts of Yangon, which will cost an estimated US$2-3 million. On a practical level, the factory will improve cost efficiency by centralising the company’s logistics – and at the same time it will serve as a school for future Sharky’s employees.

“McDonalds has its university – Sharky’s will have its own to train and mould our workers. It will be another showpiece of what can be done in a third world country. The factory won’t just be a factory – it will be an atelier, an artisan workshop.”

Sharky plans to sustain the million-dollar factory by making it a destination unto itself – he describes the concept as a “living food museum”. The first phase will feature bread-making and it is scheduled to open to visitors in October.

Sharky has three investment partners: his elder brother Kyaw Htut Win, his sister-in-law Nant Shwe Zin and British expat Jane Brook, who he said was chosen because she was a long-term Sharky’s follower and “understood how we grew and sustained ourselves.”

While Sharky acknowledges that new investment partners will be necessary down the track – which include future plans to list on the Yangon Stock Exchange – for the moment he is more than content with the current set-up.

“We get offers from investment firms on a monthly basis and I turn most down,” he said with a light-hearted laugh.

“For the moment we don’t want more investors. I want to retain my creative freedom. Once you have new investors it changes the dynamics – they’ll want a profit ratio and to do that they will cut out certain departments that aren’t producing enough revenue.”

Sharky prides himself on being a self-taught butcher, baker and farmer – the only mentor he ever had was a Swiss cheese-maker.

He attributes his success to being curious, obsessed and willing to fail. His advice to the next generation of entrepreneurs is to embrace failure.

When asked whether he still considers himself a shark, the 56-year-old paused and said: “I am not quite a shark. I am an alpha male; a dominant male – sharks are dominant predators in the sea.”

But really – a predator?

“Yes in one way I am, because you have to be. But nowadays I’m a friendly shark. When I was young I was so ambitious and was competing against all the odds to progress from being a worker to the owner [a feat he achieved and the company he named Sharky’s]. I was a foreigner in Geneva and didn’t master the language like most people. So I used everything I had: attitude, hard work, a little bit of luck and the right mentors. You have to have that fire – without it you won’t succeed.”