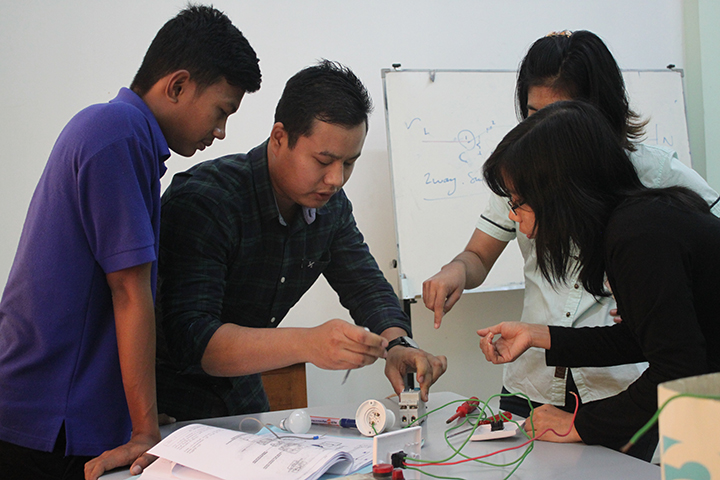 Myanmar has a large workforce comprising more than 30 million people, of whom half are aged between 15 and 29, according to World Bank data. Yet while the country’s potential productivity is vast, it remains largely untapped. Despite significant gains made in the years since Myanmar’s reform process began, the decades-long legacy of an underfunded education system remains challenging for young people seeking gainful employment. University enrollment rates stand at 11 percent and just 1.7 percent of those aged between 16 and 19 are engaged in some form of vocational or technical skills training; while less than four percent of Myanmar’s total population is undertaking training, according to figures from the International Labour Organisation, Asian Development Bank and 2014 census data. These figures in no way reflect a collective lack of ambition or drive: the barriers to accessing credible qualifications remain insurmountable for many. And at the same time, Myanmar’s opening up to the world has led to an ever-increasing demand for skilled workers.

Since 2002, the Centre for Vocational Training (CVT) in Yangon has been working hard to help young people, and particularly those from disadvantaged backgrounds, to overcome the many barriers to learning and improve their employment prospects.

CVT was established by Swiss citizen Max O. Wey, who came to Myanmar as a Red Cross delegate with a three year tenure, after spending most of his adult life in Asia and Africa. Mr Wey became keenly aware of the need for young people in Myanmar to acquire vocational training and a corresponding lack of opportunities. As the years passed, Mr Wey came to regard Myanmar as his home and its people as his family, according to CVT Director Daw Yin Yin Aye, who has been with CVT since its humble beginnings. Mr Wey remained in Myanmar until two weeks before his death in 2008.

“In the past, vocational training in Myanmar was scattered across a number of different ministries, which meant that no one ministry was really onboard to develop such programmes,” Daw Yin Yin Aye said.

Using his knowledge of the Swiss dual education system, Mr Wey launched the first vocational training class in Yangon in December 2002. Today, CVT teaches 30 different classes and offers diploma courses to aspiring cabinet makers, electricians, metal workers, commercial assistants and hotel and gastronomy assistants. It has worked in collaboration with the Swiss Agency of Development and Cooperation since 2013. Further progress was made when CVT signed an MOU with the Ministry of Labour and the Ministry of Social Security and Welfare, which streamlined the qualifications process. CVT now also serves as an assessment centre for Myanmar’s National Skills Standard Authority (NSSA) for five different trades and professions.

Swiss teachers work with their Myanmar counterparts at CVT to adapt a Swiss curriculum that suits local market needs. Swiss textbooks are translated from English to Myanmar and exam papers are marked by Swiss teachers, each of whom work on a volunteer basis for CVT. While first and second year course books are in the Myanmar language, every course book produced by CVT is bilingual, which gives students the opportunity to learn English should they be inclined to do so. Hospitality students switch to studying exclusively in English in their second and third years, due to the international nature of the industry.

Approximately 20 percent of the businesses involved with CVT are foreign-owned, while the vast bulk are locally owned, Daw Yin Yin Aye said. However the ratio is shifting in the hotel sector rather rapidly due to the growing number of international hotels setting up a presence in Myanmar.

“There are also many international tourism companies interested in our programmes. However we actively seek to involve mostly local tour companies so that we can contribute to building skills domestically,” said Daw Yin Yin Aye.

Priority is also given to students from disadvantaged backgrounds.

“We receive a lot of applications to take part in CVT programmes because young people are eager to have well-recognised, Swiss qualifications. However when we assess admission profiles, we give priority to disadvantaged youths. We do this because we know we can change young peoples’ lives by providing vocational educational courses,” she said.

Earn while you learn

Students spend one day a week learning theory at CVT, which is based at the Myanmar Red Cross building in Yangon. The remaining four days are spent at a workplace where they hone their practical skills.

“Students can discuss problems that they cannot solve at a workplace when they come to CVT, such as why a particular piece of wood being used to make a cabinet is shrinking,” said Daw Yin Yin Aye.

Those in the commercial sector earn an average apprentice wage of K80,000 per month. Those who perform particularly well often receive increment salary increases, which can reach up to K110,000.
Daw Yin Yin Aye said that many students take pride in being able to contribute to their family’s income.

“Although it is a small income, they are nonetheless making a contribution to their families. The majority of CVT students say that they give at least half their earnings to a family member, such as their mother or an aunt.”

In the current 2015-16 financial year, CVT has been providing training to 500 apprentices and 100 E4Y students, the latter of whom are under-privileged school drop-outs aged between 11 and 15.

“E4Y students can read and write but cannot continue their studies due to various personal circumstances, which can include illness or the death of a parent.”

Although primary schooling itself is free of charge in Myanmar, the associated costs of daily bus fares, uniforms, school bags, umbrellas and meals can prove cumbersome enough for some families to have to discontinue their children’s education at a young age.

“Some families don’t have enough money to put food on the table – school expenses are just out of the question,” said Daw Yin Yin Aye.

CVT aims to break the cycle of poverty being passed down from one generation to the next. Approximately 120 candidates are selected from social welfare institutions, including a Yangon hostel that houses 200 orphans and disabled youth. Funds are provided to cover meals, travel and the like.

Daw Yin Yin Aye said that most apprentices remain with the company once their training period is complete. While some companies may only select half or so of the apprentices they take on, CVT students are provided with CV writing assistance and have ample time to find another employer before the apprenticeship period ends, she added.

“Out of the 500 people that started courses at the beginning of the school year, only 14 have discontinued the course,” she said.

One of the reasons why students drop out is because they are poached by other companies after acquiring a basic skills set.

“A student may be offered a slightly higher salary by another company, which is the main reason why they don’t complete the course,” she said.

The odd CVT student returns to visit their training school to give thanks to their teachers. Many have gone on to become small business owners, or undergo further training to become a CVT instructor. Former students also network together on a regular basis.

“Some of our students now ear higher salaries than us!” said Daw Yin Yin Aye with a grin.

With CVT’s existing school bursting at the seams, a larger complex will open in Yangon’s Thingangyun Township in May 2017, thanks to support from the Swiss Agency for Development and Cooperation. This will allow CVT to double its intake of students in vocational training programmes and further expansion will always remain the aim of the game.