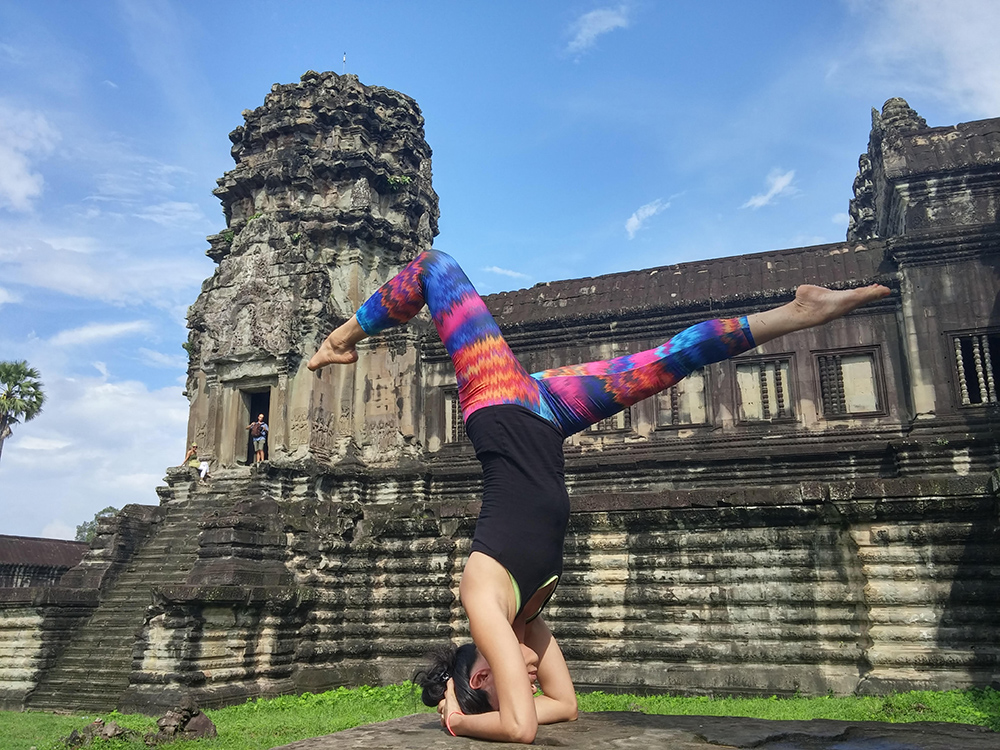 Jojo Yang spent the first 20 years of her life avoiding all forms of exercise.

“I was never athletic – I was the last kid picked for sports teams at school because I was small, scrawny and uncoordinated,” she told The Global New Light of Myanmar.

She was so determined to skip high school gym class that she used the only loophole that enabled her to do: by managing the boys’ wrestling team.

Ms Yang took her first yoga class 10 years ago after a friend promised her that it wasn’t like other types of exercise in that she could ease her body into it.

Ms Yang soon found yoga a useful outlet to counterbalance the prolonged periods she spent sitting down as a frequent business traveller – and as a way to pass the time during long evenings spent in hotel rooms. It certainly wasn’t a case of immediate infatuation.

“For the first few years, I was like, ‘I’m not sure I get it.’ I was always asking myself if I was doing it right and I was always trying to match someone else’s pose. It wasn’t until I took a few private lessons that my practice completely transformed,” she said.

The 30-year-old started getting serious about yoga three years ago. She found that if she went a couple of weeks without doing it, she’d get the feeling that “something was missing.”

At around the same time, her disenchantment with life in the corporate fast lane, both in Manhattan and London, led her and her partner to give their careers a serious rethink.

“Every day felt like the worst day of my life. My job was draining and soul-sucking. No one ever came up to me at the end of the day to give me a hug and say, ‘Thanks for that power point presentation’ or whatever,” she said.

Ms Yang zipped off to Bali to complete a 200-hour yoga teachers’ course and she and her partner then settled in Myanmar last year, after friends insisted that Yangon is “where the action is.”

Within a month of teaching her first class, a student came up to Ms Yang and gave her a hug – she was grateful that Ms Yang’s cues had helped her master a certain yoga posture for the first time.

“It was the best career choice I ever made. What I do is fulfilling. I wake up every day and feel excited to teach,” she said with a grin.

And it’s not as though business in Yangon is grim: since starting off a little over a year ago teaching a free class once a week in a friend’s apartment, Ms Yang now has her own studio – Yangon’s first – and a client mailing list of around 750 people. As many as 200 students visit Yangon Yoga House every week for a lesson from Ms Yang or one of the eight other teachers. Different styles of yoga are taught, with classes that cater to the beginner to the more advanced, and there’s are also pilates, barre and circuit training classses. Yangon Yoga House has arranged a number of international yoga retreats, including one at Cambodia’s Angor Wat that took place in early October.

However not everyone has been converted.

“The first thing I hear is: ‘I can’t do it because I’m not flexible enough,’” Ms Yang said.

She said this is one of the most common misperceptions about yoga – and yet as Ms Yang explains, flexibility is one of yoga’s core benefits (pardon the pun). And this is not simply about being able to touch your toes or do the splits.

“As people start to get older, things start to contract. Mobility becomes limited. It commonly starts with lower back pain and that’s because the core is weak or the hips are tight.”

The more flexible a person becomes, the better able they are to sit or stand for long periods of time. It’s also an enormously effective way of preventing injuries among those who regularly do other forms of exercise, such as running.

Another common misperception is that yoga isn’t hard enough because it’s not a cardio-based work out.

“If the poses are done properly, it’s always an effort. And if you breathe properly you will sweat and feel the intensity,” Ms Yang said.

However Ms Yang is at pains to point out that yoga is more of a lifestyle than an exercise. Serious yogis rarely eat meat and one of the most common reasons people rave about yoga is its ability to soothe the soul and de-stress the mind.

However for some, yoga’s spiritual aspects (namely, chanting) are off-putting; for years yogis fought against the stigma of being associated with hippies. Yet it’s they who are having the last laugh as more and more become converted; perhaps in part out of sheer envy of practitioners’ beautifully toned and sculpted bodies. (For the record, when asked, Ms Yang put her total lack of body fat down to “luck in the genetics department.”)

Interestingly, up until quite recently, yoga and meditation were one and the same. The sole purpose of a ‘vasana’ (posture) was to prepare the body to sit for extended periods of time during meditation. It wasn’t until 100 years ago that yoga became a separate discipline and a host of new postures were invented.

“Back then, being a yogi was like being a hermit – the original tradition was to retreat into the Himalayas and sit in a cave and eat very little,” Ms Yang explained.

It’s ironic that in today’s modern age, in which we stare at computer screens for hours on end – during both work and play – that yoga’s potential benefits have never been greater.

The West has in general been pretty slow to catch onto the benefits of the ancient practice, whose origins lie in India. Yoga was first mentioned in the texts of Hindu Upanishads and Buddhist Pāli Canon during the third century BC, but it took until the 1980s for yoga to be accepted as a legitimate form of exercise in the western world.

“In terms of general wellness, the exercise is just one element. If you really want to get healthy you need to bring it into your diet, how you approach life – stress plays a big part in how your physical being is. It’s all connected.”

As someone who never had the confidence to take on traditional sports, Ms Yang is keen to emphasise that everyone can enjoy the benefits of yoga.

“It’s about accepting where your body is now. Yoga is a journey and there is no destination or end point. It’s simply something you can do for the rest of your life.”