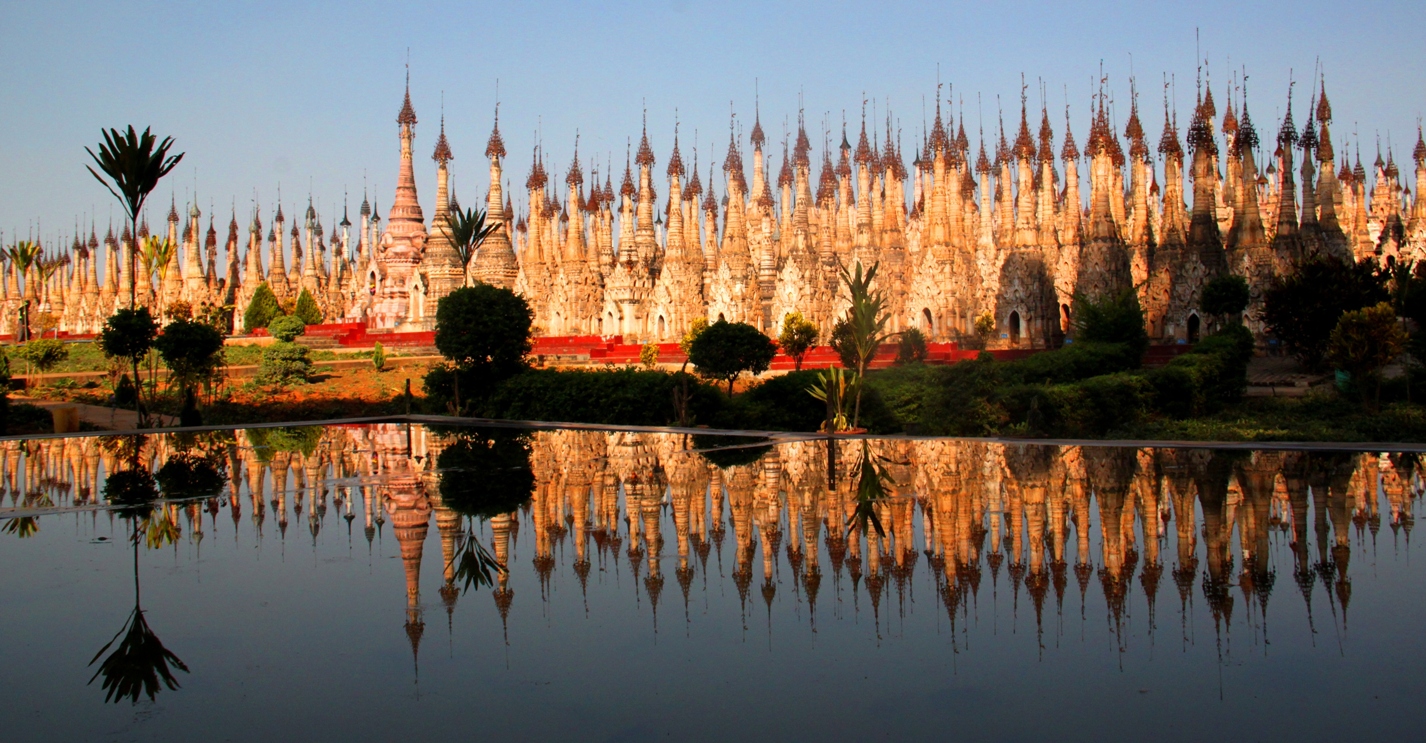 A morning spent wandering through the bustling markets of Taunggyi, the capital of Myanmar’s mountainous Shan State, is a delight for any photographer, as the produce and people are colourful, exotic and – in the latter’s case – overwhelming friendly. In the Old Market, vendors wearing eye-catching tribal costumes fanned themselves under the sun in front of huge stacks of dried fish of assorted shapes and sizes (and smells) as well as an astonishing range eggplants and spinach, blood red tomatoes and of course, Shan State’s famous tea leaves. There was also a vast array of electronics on display in the New Market, as Taungyyi lies close to the border with Thailand, making it a hotbed of trade – not all of which is legal.

After building up a hunger so powerful it could no longer be ignored, my husband and I returned to our driver outside Golden Island Cottages, where we were scheduled to meet our Pa-O guide, who would accompany us to the legendary Buddhist site of Kakku. Kakku is considered the most breathtaking site in all of Shan State and it’s the heart of Buddhist worship for the Pa-O tribe, whose population in Shan State is estimated to be around a million, although very little scholarship about them exists. Anthropologists believe the Pa-O are originally from Tibet, and migrated to Myanmar more than 2,000 years ago. As a Burmese journalist wrote in a 2004 article called, The Pa-O – The Forgotten People, “The traditions and customs of the Pa-O are little known and gradually disappearing.” The Pa-O are nowadays chiefly known for the bright turbans worn by female members of the tribe – the turbans have a chequered pattern, with the base colour usually orange, though the brightest of pinks are also commonly worn.

Despite the fact that our guide was of course wearing one of these eye-catching, loosely coiled orange turbans, along with a navy blue blouse, long skirt and jacket, it was her inquiring eyes, framed beneath a pair of thickly rimmed spectacles, which first grabbed my attention. Smiling widely, she shook our hands and asked where we were from – and without further delay we began the 45 kilometre journey to our destination.

Suu (who shares part of her name with Aung San Suu Kyi) chatted away happily with our driver, who I guessed was also in his early twenties. Although Myanmar people are among the world’s friendliest, many international visitors are struck by a general shyness among men and women alike (which is not be confused with being aloof, or even stand-offish). Whether it’s because Myanmar was a closed country for so many decades or simply a cultural norm, there’s a certain quiet gracefulness about Burmese people that I’ve not encountered elsewhere. For example, even in Myanmar’s commercial capital of Yangon, it’s extremely rare to hear someone shout in public. The honking of horns is a new phenomenon, brought about by a flood of imported cars on the roads. Most people are softly spoken in the workplace also, so Suu’s extroverted nature intrigued me. For the next four or so hours, she seemed never to stop smiling, and was as curious about our life as we were about hers.

We stopped after about 20 minutes at a quiet village and ravenously devoured bowls of Shan noodles, which is a simple but delicious traditional dish comprising flat, wide noodles, chicken broth, tomatoes, chilli and peanuts.

Once I was feeling full enough to regain my concentration, I asked Suu about the history of the Pa-O turban.

“Let’s order some green tea,” she said, before settling into the story.

“A long, long time ago there was a female dragon who lived alone in a lake. One day the dragon saw a hermit man drinking from the lake, and he was so handsome that she immediately fell in love with him. So as the hermit wandered off into the forest, the dragon transformed herself into a beautiful woman and followed him to his small hut. The two fell in love and began living together, but the hermit was often away on long pilgrimages. The woman sometimes reverted back to being a dragon in his absence, because it was after all, her natural form. One day, unaware that the hermit was about to return home, he discovered her sleeping on a mat in the hut and was horrified by her appearance. He also felt deceived, so he left her, never to return. By that time, however, she was already pregnant. Distraught and alone, the dragon-woman laid three eggs, before returning to the lake. The Pa-O are descended from one of those eggs, which is why we wear a turban – it resembles the head of a dragon. And Pa-O men dress like the hermit father, wearing brown robes and a turban which is draped to one side, just as a hermit might wear his hat,” she said.

Having already discovered that Suu has a degree in economics and was a huge fan of Korean movies and Facebook, I was curious to know whether she considered the story real or mystical.

She paused for a few moments before saying, “I’m not sure if I believe it anymore – of course I used to when I was young. But my grandmother and mother would be angry if I told them I had my doubts,” she said with a shrug.

Suu then confided that she only wears the turban when she’s working with tourists or attending a Pa-O wedding, because her hobby is tailoring clothes and her passion are Western designs.

Nonetheless, Suu said that she observes many of her grandmother’s superstitions at home, though I sensed this was more about keeping the peace than anything else. When intergenerational change happens so rapidly – which nowadays is common in Myanmar – rifts can often lead to serious conflict, as many of my Burmese friends have told me. Her grandmother cannot speak Burmese, only the Pa-O language, and she is also illiterate and passionate about maintaining tribal customs. Naturally therefore, she disapproves of Suu not wearing traditional dress, but a compromise has been established within the family.

I asked Suu whether it’s possible for a Pa-O to marry someone who doesn’t belong to their tribe, such as the majority Shan tribe.

“Sure – now it would be possible for me to marry a Shan man if I wanted to. But we are not allowed to remarry after divorce. Only if we’re widowed, like my mother,” she explained.

Suu’s father died when she was 10. He belonged to the Intha tribe, who are also predominantly Buddhist and reside in the tourist hot spot of Inle Lake, which is 25 kilometres away from Taungyyi. The marriage was opposed by her father’s relatives, and Suu said her mother has forbidden her to visit Inle Lake.

“I wish I could see it – it looks so beautiful in pictures. But my mother and grandmother don’t want me to see my father’s relatives and I don’t want to upset them,” she said wistfully.

We continued on to Kakku, passing colourful fields of onion, potatoes, mustard, cabbage, tobacco and sesame, but the crop that dominated all others was garlic – a staple in Pa-O cuisine and a major source of local livelihoods.

“A Ukrainian tourist once told me that garlic is used to ward off vampires in his country. But Pa-O people love garlic – we even do rain dances to ensure our crops are successful,” she said.

I tried to explain that the tourist had been pulling her leg, but she looked at me doubtfully so I didn’t press the matter.

We arrived at Kakku as the afternoon sun was beginning to lose some of its heat. The astonishing site is thought to have been founded way back in the 3rd century BC, by the Indian emperor Ashoka. Over time, the 2,478 stupas were built in various colours and designs by different rulers, and some of the stupas have carvings of humans, animals and mythical creatures, while others are quite plain. Although restoration has been carried out quite extensively, my favourites were those that had been left to crumble gently over time and were overgrown with trees and vines.

At one point, when Suu was a few paces ahead of me, I called out her name so as to take a photo of her walking through the maze of stupas. She spun around with a grin, made the “Victory” sign with one hand – and stuck out her tongue.

Bemused, I said to Suu, “You look like Miley Cyrus when you do that.”

“I love Miley Cyrus! Well, only when she was on Hannah Montana. Now she’s weird,” Suu replied with a giggle.