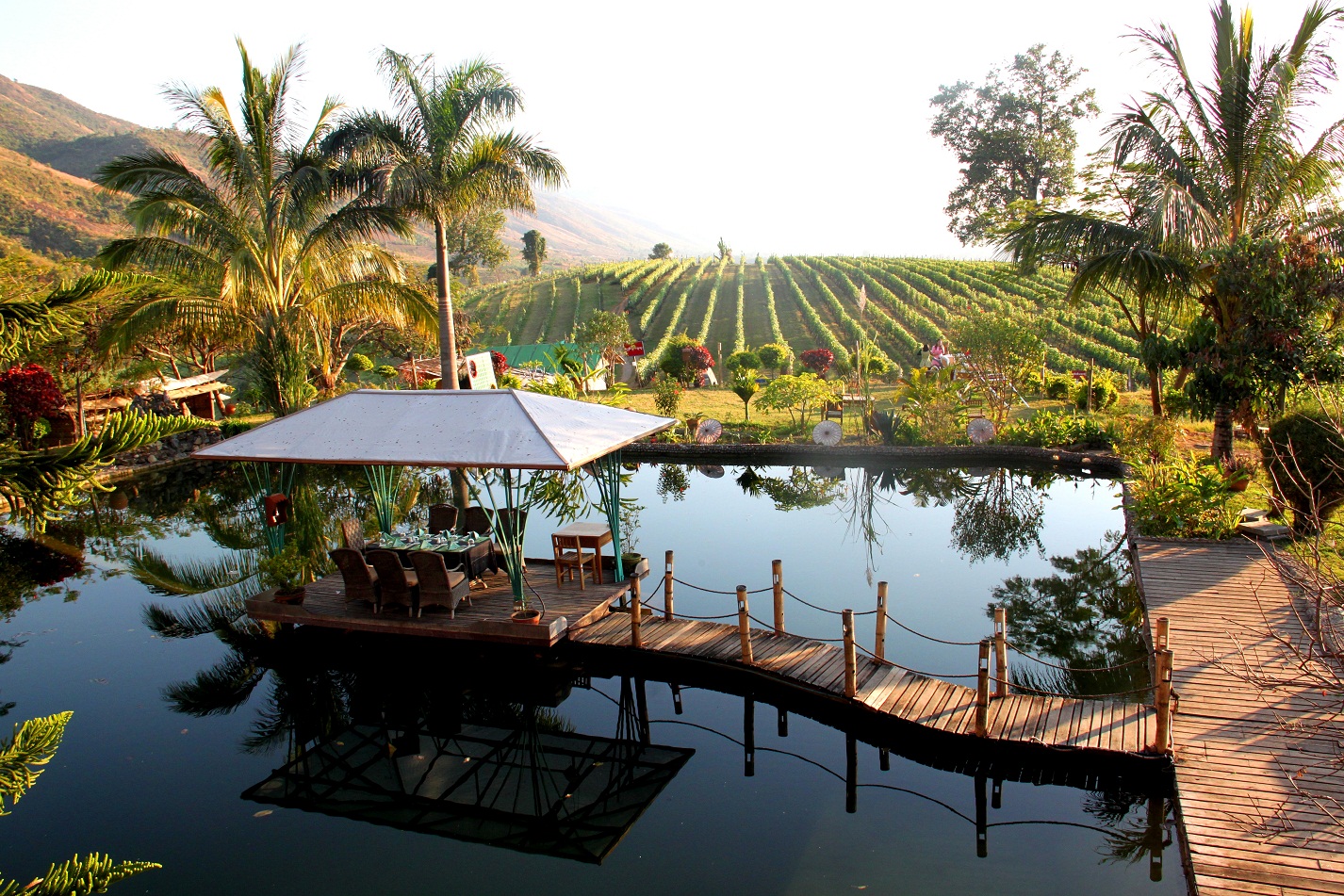 Burma is blessed with a gilded, gravity-defying rock, thousand year old temples and a natural lake that’s bigger than San Marino, yet one of the country’s more understated experiences is no less memorable: drinking local wines where the grapes are grown. Burma has two wineries, both located in mountainous Shan State, where the elevation is high enough to produce very decent white wines and velvety reds.

“We’ve had only positive feedback [about the winery],” said Bert Mosbach, the managing director of Myanmar’s first wine producer, Myanmar Vineyard Estate Co. Ltd. Its Aythaya label is named after the village the winery is located in, which lies at an altitude of 1,200 metres.

However Mr Mosbach said he plans to have a sound barrier installed at the winery to wipe out every last trace of noise from cars en route to or from nearby Taunggyi, the state’s bustling capital.

“Paradise shouldn’t have any noise,” said Mosbach, who boasts that his winery, which is run by fellow German compatriot, winemaker Hans Leiendecker, “is the nicest place in southern Shan State.”

Indeed, by the time the sampling of four wines was complete (K2,000) and as the sun was casting its final glow over the rolling hills, it was easy to imagine that life doesn’t get any better. By the time the first bottle of sauvignon blanc was emptied and the shiraz delivered to the table by our friendly Chin waiter, it was more than mere imagining. The only distraction to conversation became conversation itself: a plump, bossy white duck chased a smaller version of itself across the pond in front of the restaurant’s balcony with as much huff and puff as Daffy Duck.

Gradual intoxication, the murmurings of French tourists nearby and a dozen or so Burmese taking selfies on the pavilion created a pleasant sense of confusion. My husband ordered spicy chicken wings and I had an avocado and a seafood salad – one local, one Western style.

According to Mosbach, the cosmopolitan nature of the guests at the winery – the majority of whom are now locals – is something he’s always tried to cultivate.

“It used to be only the Europeans, Americans and Canadians who came to the winery, but lately a lot more Asian tourists have been coming. While I’d say that wine appreciation is definitely growing in Myanmar [Burma], there wasn’t a tipping point as such… It kept Hans and I wondering when that moment came, when local consumers took over as the majority.”

After years of trials and tribulations – such as having his basmati rice farm in Loikaw, Karenni [Kayah] State, confiscated by the former military government, then having to abandon his first winery (also in Loikaw) due to armed conflict between government troops and ethnic rebels, Mosbach is now literally reaping the fruits of his labour.

He told DVB that Aythaya’s sales are at an all time high. Whilst it’s no surprise that local wine sales benefitted from the government’s sudden crackdown on imported alcohol and tobacco in the lead-up to Christmas last year, Mosbach said that many consumers were converted.

“It was a moment for many wine drinkers who had never touched Myanmar wine to try it. And they’ve stayed with us since, which is wonderful,” he said.

Mosbach said that sales in January broke December’s record, and that February was even stronger. Although he declined to provide sales figures, he said sales volumes are “already double what they were in 2013.”

In fact, it’s now local wines that are out of stock.

“We sold out of our white wines last Friday. It’s still in the shops, but we can’t fill our new orders. It’s the first time we’ve had this problem. We can’t sell more until the wine is ready – which is about three weeks from now.”

Mosbach is considered the pioneer of wine-making in Burma, having set up Myanmar 1st Vineyard in 1999 – however he does have one award winning competitor: Red Mountain. Its winery has a more rustic feel and lies in a valley close to Nyaung Shwe, with magnificent views of Inle Lake. Its altitude is slightly lower, at 950 meters above sea level. Unfortunately however, the white wine was served in a bucket with an awkward slab of ice and wasn’t properly chilled, while the food and service was somewhat mediocre.

“Competition stimulates business and there’s room for more of it,” Mosbach said with a smile. He added that Aythaya is outperforming Red Mountain with “significantly more sales.”

Mosbach is also adamant that Burma’s climate is “perfect” for making quality white wines, which gives it an edge over regional rivals. In Thailand, for example, most vineyards have been set up in low altitude, tropical climates, of between 0-200 meters above sea level. According to Red Mountain’s winemaker Francois Raynal, “Thailand’s sauvignon blanc and pinot noir are not growing well.”

“It’s no accident that we’ve sold out of white wine,” Mosbach said.

“There was a 300 person function held recently for the German President’s visit, and people there told us that Aythaya is the best white wine in Asia. This confirmed my own opinion.”

When DVB told Mosbach it had heard through the grapevine that an Asian Wine Producer’s Association is in the process of being set up, and that it already has 10 founding members from the wine producing countries of Japan, Thailand, China, India and Indonesia, he sat bolt upright in his chair.

“Tell [the association] that we want to join,” he said.