I came across this kooky cookbook compiled by the Transvaal Baptist Women’s Association while I was living in Bangladesh. That’s a long way from the cookbook’s origins of Greater  Johannesburg in South Africa and I’d love to know how many hands it passed through until I saw it 12 years later.

At the time, I was gleefully sticking post-it notes on delicious looking recipes in the assortment of cookbooks our cook in Dhaka had brought over for us to peruse when he started working for Sherpa and I. “Favourite Microwave Recipes” caught my eye – not because anything looked tasty (nor did we own a microwave in the first place), but because of the surprising sentiments it expressed. Its format is a confusing combo of first testament advice for converting sinners along with practical tips for the homemaker. You may find this post distasteful (ho ho), but I honestly consider this recipe book a comedic treasure to behold.

Here’s a few photos by way of illustration:

Below is a metaphor about jam – that I don’t quite understand – followed by a recipe that would be hard to feed most children:

Next is another statement linking jam with Christian values.   Whilst I’m not sure that jam cuts it in terms of defining a mother’s loving kindness (and can fathers not put a spread on bread?!) – I guess the contributors would disagree…

More advice on loving kindness is contained below. Personally, I’m averse to the whole concept of “sinners” and “converting” and would disagree that learning bears less fruit at any rate (not to say loving kindness is mutually incompatible with anything it’s compared with).

The next two photos reveal the strange results of fusing a simple cookbook with strong religious overtones:

I’m not suggesting that anyone would be stupid enough to confuse Biblical messages with practical know-how, but surely out of respect, an altered format to distinguish the two would have been better?

Contradiction: a common malaise for all religions.

Though it’s advised that ‘the secret of patience is doing something else in the meantime’ – the microwave itself was a brilliant time-saving invention – ovens leave much more time for patience to softly simmer. 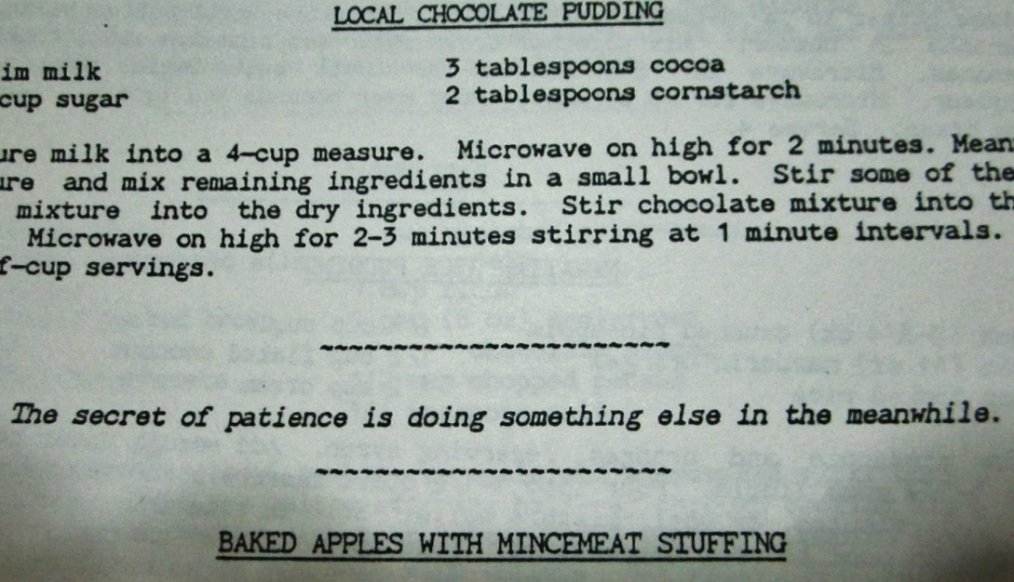 And why tempt mothers with a recipe for Speedy Chicken Stew?

Regarding the introductory page, the president of the South African Baptist Women’s Association (SABWA) emphasises that their goal is to “show our love through giving.”  However the next sentence goes on to thank those who bought SABWA’s book, the proceeds of which would be used to cover the costs of transporting its members to training seminars. Call me cynical, but this is sort of helping yourself (admittedly, the president does say. “thank you for helping us”) – “us” meaning an organisation which propagates a very particular set of beliefs. If the money raised from sales was donated to victims of famine or the like, I think that would be considered giving.  And then I wouldn’t feel it necessary to post Mrs Cynthia Lotter’s words of welcome to justify my criticisms.

The ‘recipe for raising children’ is sweet and so, so cute, though unfortunately unoriginal – an online check confirmed it’s been paraphrased.

While searching for other examples of weird cookbooks, I found one that trumps the above.

I think it’s real and would love to hear from anyone who purchased a copy of A collection of semen based recipes.

One thought on “Jesus with Jam: A cookbook like no other”